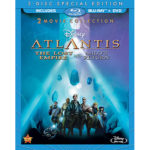 It was not so hard to hilight my least favorite Disney movie. Outside of a few ‘groaners’ that were not quite relegated to the least favorite bin, the one that I just can’t get into, no matter how hard I have tried is the film Atlantis. I don’t know why this film never grew on me, it just didn’t. I have tried throughout the years to rewatch it because my husband sees this one as a not quite Disneyfied variant that he can watch without feeling like every animal is going to belt out The Hills Are Alive With the Sound of Music or something, this film kind of feels more like an original animation somewhat out of style with the cutesy Disney. I agree. The movie does stand out, and maybe thats why I just can’t seem to like it. I have tried, I mean the characters are kind of interesting and it has a lot of neat pieces to it, but for some reason this film just never made it into what I see as my favorite.