Jeri The Fairy and The Dress

Once upon a time at the edge of a beautiful lake, at the base of the most majestic of pine trees, was a little kingdom that we’ll never see, full of creatures named The Fairies. The Fairies bring all the little bits of magic back to us, they bring all the sparkle to all that we love. They create the gems that give sparkle in lakes, they add all the glitter to the winter’s snowflakes. The Fairies create the paint for all autumn’s leaves and all the bits of magic that help us believe. In all of the Kingdom, no one could find another Fairy, that loved to spread fun, laughter, and magic like Jeri. Jeri’s best friend was a big black dog whom she found on a day that was rainy and grey, his favorite thing was simply to play. His name is Dog because there is simply no one more dog-like than he, with his big curious snout, wagging tail and puppyish glee.

On this beautiful day, Jeri was home. It was late summer, and the water all glistened, you could hear the birds singing if you carefully listened.

The sun warmed the leaves, and all of the fairies could do as they pleased.

So Jeri, with a flick of her wings, and a toss of her blonde wavy hair, decided it was a day to clean up her things. Her sweet little home was nestled in the roots of a tree, and I’m sure you can imagine, it gets dusty far quicker than the houses of you or me.

The Dog laid in his favorite patch of sun, while Jeri danced around, because for all fairies, but especially Jeri, even chores are fun! She sang while she tidied, and did dishes, and dusted – Dog just laid there wondering what all the fuss was.

“Oh Hat!’ Jeri happily cried, as she cleaned out the closet and found a dress she forgot was inside. A dress made of the finest silk and lace, such a beautiful dress, how had it been misplaced? She gleefully showed Dog, who just didn’t care, what was special about a dress when he was there?

With nowhere to go, Jeri thought “well, why not?’ and slipped on her treasure before she thought to stop.

It was perfect! “So beautiful, it could have been made just for me!’ Jeri told Dog, she could hardly hide her glee.

She admired and twirled in her lovely big dress, she giggled, swished and danced, “I feel like a princess!”

Dog looked at Jeri, and then at the door. “Oh, hat!” she exclaimed, “It’s quarter to four!”

At four they had tea, and Dog would jump in the lake, and today they had promised to meet Mrs. Flutters for cake.

“No more time to play dress up or be a princess,’ Jeri told Dog “it’s time to go back to being a normal young fairy in a normal fairy dress!’

She tugged on the zipper but the zipper seemed to be stuck! She pulled one more time without any luck.

Jeri turned, and twisted, and flapped her wings, But the dress would not budge the stubborn old thing! She struggled, and wriggled, and stood on her head, as Dog watched in amusement from his sunshine-y bed. 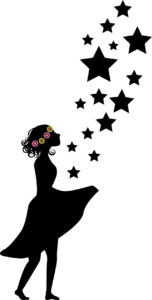 “It will have to be cut, since you’re no help without thumbs!’ Jeri just laughed, thinking of how silly this had become.

She twisted again, but it was no use. And with a small sigh, she reached for scissors to cut herself loose.

Try as she might, with no mirror to see, Jeri was unable to cut herself free! The scissors got caught in the loop on the zipper, and Jeri’s wings fluttered a little quicker.

“Trapped, oh, I’m trapped’! Jeri muttered as she tried to grab the scissors, her wings all aflutter.

With one more bend, and a pull, Jeri let out a shout, she wasn’t sure how it happened, but suddenly she was out!

The dress slipped off, and the scissors clanked to the floor. Dog barked in success and sauntered to the door. Jeri picked up the dress and put it away, there would time to play princess another day.

And that’s the story of Jeri The Fairy, Dog and the dress.
I wonder what mischief they’ll get into next?

Rebecca is an Elliot Lake raised actress, author, vocalist, makeup artist, and dancer. Her 4-year-old theater company, That’s My Cue Productions, celebrates diversity and inclusion, performing her own plays, as well as plays by Canadian playwrights. When not performing, or writing, Rebecca enjoys playing, and coaching slow-pitch, and is an avid fan of the Elliot Lake Wildcats Hockey team. 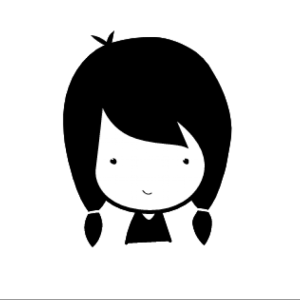